This is the representation that comes to my mind if I just consider the information given by the Bible and ignore all the other information learned from other sources. 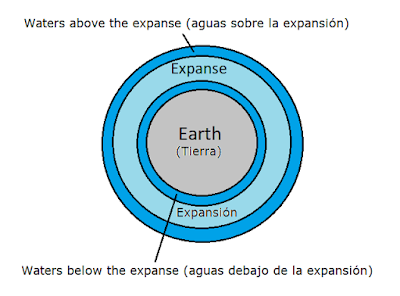 Before the deluge, the atmosphere of the Earth was appropriate for the eternal life of the humankind, this means that the sun did not affect the living beings and plants as it does today because there was a shield of water, the water above the expanse, working as a lens filtering the rays of the sun. The human skin did not age by the effects of the sun. The fruits did not ferment too.

This explains why the humans could live forever before the sin, without aging, our skin ages under the effect of the solar rays. After the fall of the man, God decided that human must die. We will cover this in future posts.

Also explains why Noah got drunk with grapes juice after the deluge. Before the deluge, when the waters above the expanse filtered the sun rays, Noah used to drink grapes juice that did not ferment. After the deluge, the grapes got fermented adding the alcohol of the fermentation to the juice. Noah did not know about the alcohol of the fermentation, Noah was a righteous man, he was not a drunk. We also will study the deluge and Noah in future posts.

It is known that all the clouds of the sky cannot contain the amount of water needed for the deluge, so the waters above the expanse fell inundating all the Earth.

Hay personas justas actualmente??
Psalms 107:1-9
351 Prophecies about Jesus Christ in the Old Testament
Genesis 1:6-8 - Waters above and below the sky
Genesis 1:3-5 - When The Brightest Light was created
Genesis 1:1-2. And this is just the beginning!
Dubious teachings and the power of the original Scriptures
“Your Bible was entrusted to the Jews before it became available to you
The salt in the Temple of Jerusalem and in the teachings of Jesus, the Messiah
Honey in the Bible
Be pure-hearted!
Latest post